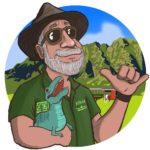 In 2017, two amazing things happend to Abba Geebz ( a.k.a. GiBi del Barrio ) that changed his life and passion forever.  First, he became a tour guide at famed Kualoa Ranch and  second, he met famous ventriloquist Terry Fator.  Never in his wildest dreams did he think that either would have the impact it’s having now on his life.

After guiding thousands of guests through Jurassic Valley (Kualoa Ranch), Abba Geebz got a real sense of the “WOW” dinosaurs had on all, young and old.  Also, this was a huge realization that being a tour guide is being an entertainer!  The experience of working at Kualoa Ranch was the “BEST TIME EVER” as he would say.  Then, the next major influence was meeting legendary entertainer and ventriloquist, Terry Fator.  Being made aware of the powerful reaction from kids to puppets and ventriloquism, the next step seemed logical.  In no less than a year, Abba Geebz bought his first professional dinosaur puppet and became a performing ventriloquist.  But where to perform then?  In stepped Seymour Kazimirski of Make’em Smile Hawaii.

A mutual friend of Seymour and Abba (Dana Land) saw one of Abba Geebz Facebook posts of him performing with his new puppet and immediately thought of aligning Abba with Make’em Smile Hawaii, which devotes it’s time supplying musicians and other artist for hospital visits around Hawaii to perform for children and spreading smiles and Aloha.

Abba Geebz is focused on visiting as many children’s hospitals throughout Hawaii and the mainland as he can with the support of the Terry Fator Foundation, Make’em Smile Hawaii, and of course, the best day job ever…….spreading the Aloha, smiles, joy and laughter with his team of Dinosaur puppets anywhere he can!

Abba Geebz going the extra mile by using his digital dinosaur skills at Kualoa Ranch to bring the best experience to life!